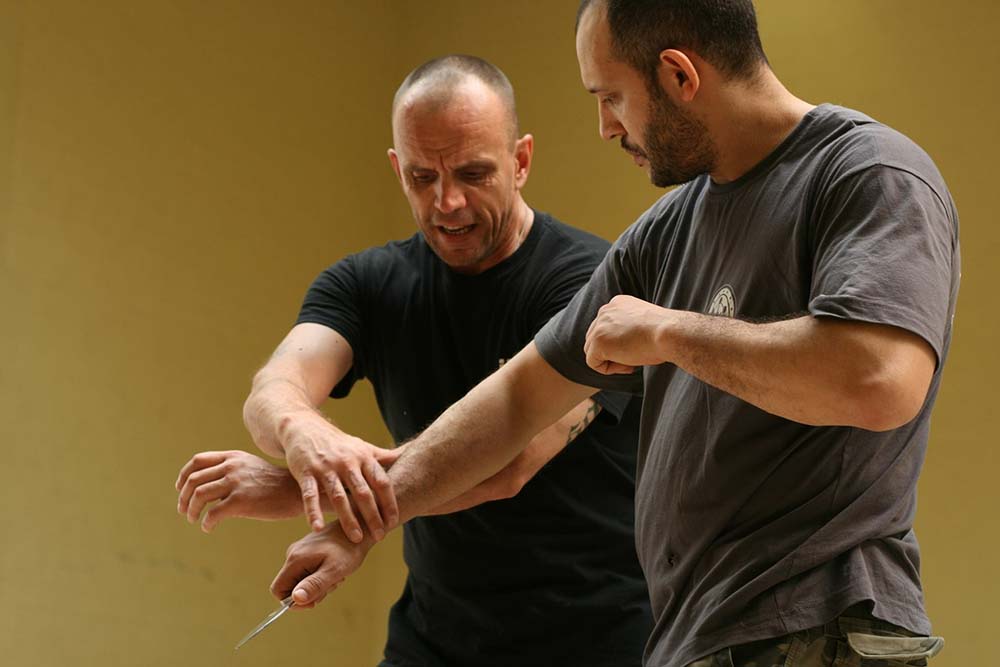 Systema in the context of MMA

As I will try to expose to the best of my abilities in the upcoming book and new DVD series, the problem of understanding the difference between training for victory in the cage versus training for performance in a potentially deadly encounter is a multi-dimensional issue:

Systema is not a martial arts style. It is a concept based methodology to develop attributes that could be applicable to various areas of everyday life – to include all things in the realm of violence. Frequently, the uninitiated have a tendency to look at training and its expression/application(s) – in this case: fighting – as “twins”… Similar in everything including appearance and aesthetics. Simplifying the concept of training to being just a slightly less intense endeavor with consequences falling short of those possible in the “fighting” realm.

While, to a certain limited degree, training must be just such a “replica” of fighting at times, this approach fails to take into consideration the following:

While attempting to replicate fighting in training there is a considerable chance of falling victim to assumptions regarding the way that things will progress “in the fight”. Those assumptions could be the result of numerous dogmatic teachings and “truths”- often propagated and fiercely defended by individuals of “authority” status; whether they be true authorities, wanna-bes, or merely snake-oil salesmen with good marketing skills. An approach such as this tends to squeeze the realm of unmitigated and truly chaotic violence into a box of some “truths”, “certainties”, and “rules”.

Training is preparation for violence. Scenario-based, high-pressure/full-speed, and intensity segments are not so much preparation, but more of an application diagnostics part of the training regimen. These must be included in training, but also must be paired with training sessions that focus on exploration; delving deeply into an understanding of bio-mechanics in motion, blind spots, and open targets – on both parties, not just your opponent(s). This is mostly slow-speed work – anywhere from 5-40% of your full speed – that revolves around the goal of replacing rote memorization with a recognition of the principles involved in a fight and adaptation to constant changes of anything and everything within the “battlefield”.

Here is a quote from an article describing and explaining fairly well what training slow does:

…describes a tennis academy in Russia where they enact rallies without a ball. The aim is to focus meticulously on technique. (Try to slow down your golf swing so it takes 90 seconds to finish. See how many errors you detect.)

By practicing in this way, performers delay the automatizing process. The mind wants to turn deliberate, newly learned skills into unconscious, automatically performed skills. But the mind is sloppy and will settle for good enough. By practicing slowly, by breaking skills down into tiny parts and repeating, the strenuous student forces the brain to internalize a better pattern of performance…”

While it mentions the technique, it is easy to adapt such work to a movement– the more free, less restrained and regulated technique.

Over the years, individuals (myself included) with a serious interest in aspects related to physical conflict have observed on more than one occasion high-level MMA fights that showcase not only some incredible feats of flawless execution of skills, but also many failures to adapt and explore glaring openings and obvious mistakes. And while “Monday Night Quarterbacking” can be a somewhat annoying trend, I can see this practice as a very important part of training – a tool to examine the whys of the great victories and the crushing losses of elite athletes in the ring or octagon.

So here is a short – and certainly not complete – list of factors that may determine the outcome of a fight. In upcoming rants I will attempt to dissect each factor separately and in greater detail:

With each of these factors examined in detail, honestly and devoid of preconceived notions, one could potentially make some radical changes to the way he trains, resulting in significant improvements in performance – on the street or in the octagon.

Be sure to read Part 1 here.